A little Background of Incredible Hulk
Marvel Comics does create a lot of superhero characters and The Incredible Hulk is one of them. The character has been filmed for a couple of times for movies and TV series. This superhero was failed to live up to the memories of the audience in 1978 TV show and is not until 2003, Ang Lee made The Hulk starring Eric Bana as Dr. Robert Bruce Banner while Jennifer Connelly starred as Betty Ross.

In reminisce, the very first comic book of The Hulk was published in May 1962, and by that time the skin of the hulk is not green but is gray!

Nonetheless, when the second issue released, his skin has been changed into green and he featured for several years in Stories to Astonish prior to experiencing his own title. The character is having a very complex mind in nature. He cans sometimes being very thoughtful, but sometimes can be a brainless brute.

While time changed, the Hulk also has gone through numerous transformations within his time. When it comes to the current comic series, the character has turned out to be a mysterious Hulk and have segregated from Bruce Banner completely.

In the comic story back in 2006, the so-called “Planet Hulk,” which is a group of secret superhero leaders, determined that the Hulk would have been a dangerous monster to the Planet and need to get rid of.

As a result, they dispatched him into space to reside in an unknown planet that didn’t have other sentient life exist. However, the ship that sending him being broken and he ended up on the planet of Sakaar which was a planet filled with violence.

The Hulk seemed to fit in well. After some time on the planet, Hulk became the leader of the planet and ultimately went up to the status of the emperor. This can be an attractive script and until now, the Hulk is still showing on a lot of movies and was incorporated into the Avengers in the latest movie. 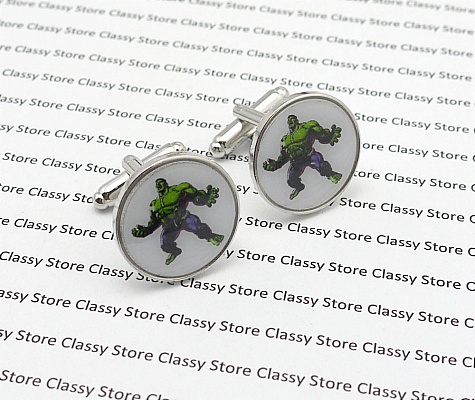 If you are a Hulk fan, you will want to get all the Hulk jewelry and carry it with you. If you want something that fashionable, sure you won’t miss out on The Incredible Hulk Cufflinks.

This can be the ideal men’s accessory that represents your combined characteristics. If you are a female, then it can be a wonderful gift for him where you can give away to your loved one. Sure he will love it and you will not regret getting this as a memorable gift.